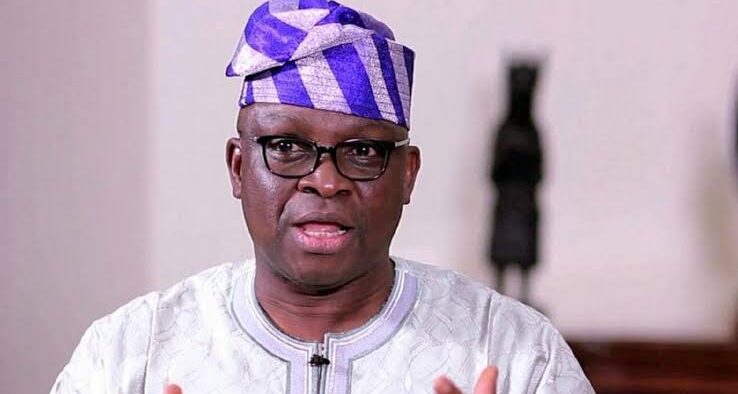 The N2.2bn fraud trial of a former Governor of Ekiti State, Mr Ayodele Fayose, and a firm, Spotless Investment Limited, continued on Monday before the Federal High Court in Lagos with an official of First Bank testifying as the 9th prosecution.

Led in evidence by the prosecuting counsel for the Economic and Financial Crimes Commission, Mr Rotimi Jacobs (SAN), the witness, Taiwo Ogundein, pointed out to the judge from bank documents, inflows and outflows of huge sums of money from the First Bank account of a firm, Still Earth Limited.

One of the EFCC’s claims against Fayose was that he purchased a N200m Abuja property from Skye Bank in the name of “your elder sister, Mrs Moji Oladeji.”

An ex-Skye Bank official, Olugbenga Falai, had in March told the court that the N200m payment for the property was made to Skye Bank “from a Zenith Bank account named Still Earth Limited.”

At the Monday proceeding, Ogundein, who said he manages Still Earth Limited’s account with First Bank, told the judge that the one Hoff Concepts Limited credited the account with N40m on January 29, 2015; while De Privateers Limited paid in N39.5m on January 30, 2015.

Under cross-examination by the defence counsels, Messrs Ola Olanipekun (SAN) and Olalekan Ojo (SAN), Ogundein affirmed that neither Fayose nor  Spotless Investment Limited featured in the transactions.

The witness, however, said he could not confirm whether First Bank considered the transactions of Still Earth’s legal or suspicious.