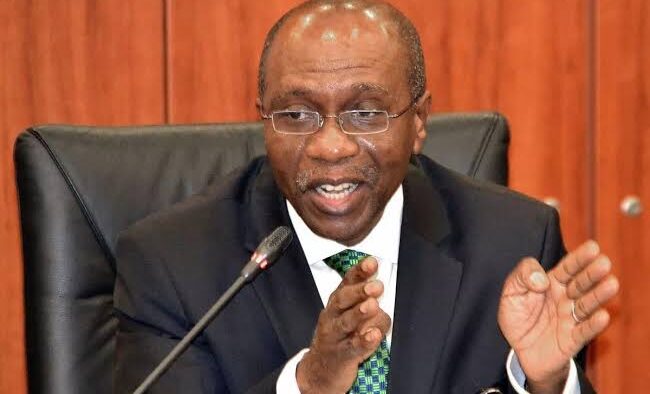 Godwin Emefiele, Governor of Central Bank of Nigeria has been reduced to a state of ridicule following his alleged role in punishing #EndSARS protesters and perceived critics of President Buhari’s administration.

This is coming amid report of restrictions placed on financial accounts of Frontliners and active participants of the recently concluded #EndSARS protests.

Northern Governors and other supporters of  Buhari’s government who claimed the nationwide protest was a ploy to oust Buhari out of office may have resorted to various means to clampdown on protesters.

Emefiele has been fingered as one of the key persons wielding the axe of power against demonstrators of the quelled #EndSARS protests.

The PUNCH on Nov 4 reported that  accounts with transactions carrying “EndSARS” be flagged down and frozen with immediate effect.

Reacting to the report, Top American Economist  accused Emefiele of being a political stooge who oppresses the masses, to dance to the tune of his master.

“Once again, Gov. #Emefiele is looking more and more like Sleepy @MBuhari’s political stooge. Keep your eye on my daily #Inflation measure. Today, it’s at 30.37%/yr.”

It will be recalled that the John Hopkins Applied Economist once described Buhari’s governance a failure that has continued to plunge Nigeria into deep financial crisis.

In the same vein, Publisher of Sahara Reporters, Yele Sowore accused Emefiele of using his office to bankroll criminal activities targeted at critics of Buhari’s governance.

“Governor of @de bank Godwin Emefiele is Nigeria’s most corrupt and dangerous operative in the @MBuhari regime, he bankrolls anything including, if necessary assassination of regime’s opponents.

Nigerians have raised alarm over the snail pace the apex bank took to trace accounts of Boko Haram terrorists and sponsors who have wreaked havoc in the country over the past 10 years.

Yet, the apex bank was able to trace and freeze accounts of #EndSARS protesters in less than three weeks.

Concerned citizens have since called for visa ban on the CBN Governor following his alleged involvement in victimising anyone who dares to criticize President Buhari’s administration.

@Tesam22 “The people that’ll be prosecuted and sent on exile or jail when youths take over governance in this country will be many.

Godwin Emefiele’s tenure as CBN Governor has witnessed the biggest decline in the  Naira history. The Nigerian currency currently stands at N467 against the dollar, a sharp contrast to N199 in 2015 before  Buhari became President.

This has continued to fuel rumors that the Governor of Nigeria’s apex bank may be working with politicians who do not have the best interest of the country at heart.

Emefiele’s policies so far have done nothing to upturn Nigeria’s fast-declining economic reputation.

“We need to stop them from wrecking more havoc in the next 2.5 years.”

@__gershom “And I need you all to understand:

“Godwin Emefiele is the most dangerous man in Nigeria.”

@StearsBusiness “Earlier in the year, Godwin Emefiele assured the public that he would defend the Naira from the economic effect of Covid-19. But the loans from IMF, World Bank, and AfDB came with the condition to do the exact opposite of what he had promised not to.”