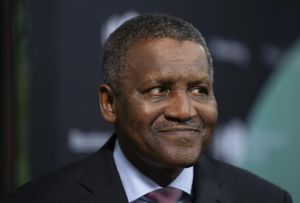 Aliko Dangote, the richest man in Africa is set to diversify his wealth, as he opens a new office in New York city, USA.

Dangote explains the reason for his new office in New York was to tackle the problem of currency fluctuations that may arise from a perceived devaluation of the Nigerian naira.

Dangote group Boss plans to use the New York office and London office branch to achieve his global goal for his conglomerate.

He made this known during an interview on Bloomberg TV

“In Africa, you know we have issues of devaluation, so we want to really preserve some of the family’s wealth,” said Africa’s richest man

Dangote’s fortune grew by $4.3billion in 2019. He currently ranks as 95th richest man in the world according to Bloomberg Billionaire Index.