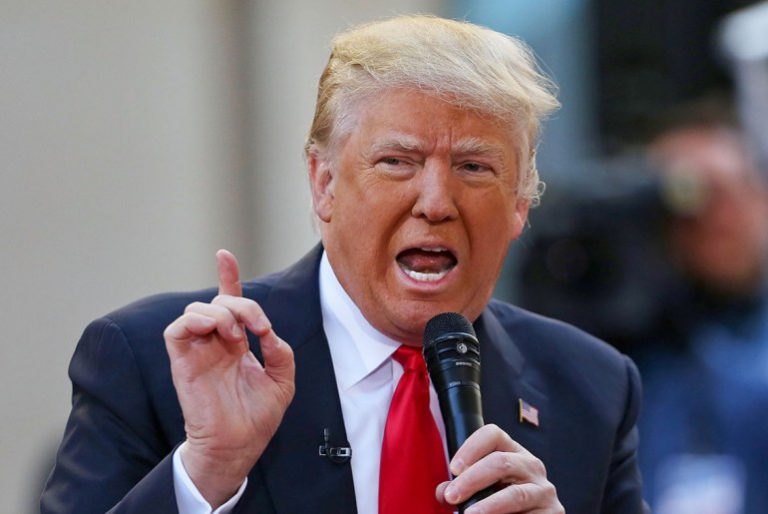 U.S. President Donald Trump has ‘apologised’ to Americans for allegedly causing traffic jams in the country following the crash in the global oil prices.

Trump, in a series of tweets, also alleged “a lot of criminals in the Caravan”, vowing “we will stop them”, “catch and detain” them.

“A big story today is that because I have pushed so hard and gotten Gasoline Prices so low, more people are driving and I have caused traffic jams throughout our Great Nation.

Trump had praised Saudi Arabia for the crash in global oil prices as oil plummeted to 13-month low on Wednesday.

The American leader tweeted: “Oil prices getting lower. Great! Like a big Tax Cut for America and the World.”

Trump’s signal on Tuesday that he would not punish Saudi Crown Prince Mohammed bin Salman for the death of Washington Post journalist Jamal Khashoggi, was widely suggested as responsible.

On the caravan, Trump said: “There are a lot of CRIMINALS in the Caravan. We will stop them. Catch and Detain!

“Judicial Activism, by people who know nothing about security and the safety of our citizens, is putting our country in great danger. Not good!”

Trump also slammed Chief Justice John Roberts over his rebuke to the president’s remarks about “Obama Judges”, calling for an independent judiciary.

Roberts had said: “We do not have Obama judges or Trump judges, Bush judges or Clinton judges.

“What we have is an extraordinary group of dedicated judges doing their level best to do equal right to those appearing before them”.

But Trump pushed back, saying: ” Sorry Chief Justice John Roberts, but you do indeed have ‘Obama judges,’ and they have a much different point of view than the people who are charged with the safety of our country.

“It would be great if the 9th Circuit was indeed an “independent judiciary,” but if it is why are so many opposing view (on Border and Safety) cases filed there, and why are a vast number of those cases overturned.

“Please study the numbers, they are shocking. We need protection and security – these rulings are making our country unsafe! Very dangerous and unwise!”

Trump had called the Ninth Circuit Court of Appeals as a ‘disgrace’ hours after former president Barack Obama-appointed federal judge there issued a nationwide injunction against his newly announced emergency restrictions on asylum claims.

Trump called the court “a terrible, costly and dangerous disgrace.

“It has become a dumping ground for certain lawyers looking for easy wins and delays. Much talk over dividing up the 9th Circuit into 2 or 3 Circuits. Too big!” (NAN)