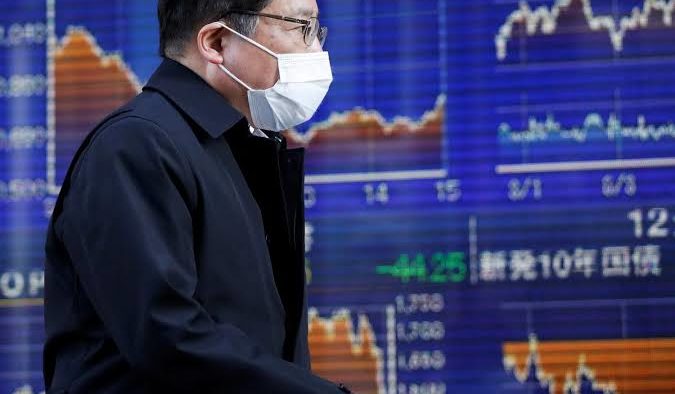 Global share prices edged higher on Monday after a surprise recovery in U.S. employment provided cause for optimism that global economies could quickly revive after many weeks of lockdowns aimed at controlling the coronavirus pandemic.

Oil prices erased earlier gains to stand almost flat after OPEC and its allies, including Russia, agreed to extend record oil production cuts until the end of July.

U.S. S&P 500 futures rose as much as 0.8 per cent to stand near their highest since late February before giving up a bulk of gains to last stand up 0.2 per cent while Japan’s Nikkei rose 0.9 per cent.

MSCI’s broadest index of Asia-Pacific shares outside Japan rose 0.3 per cent, extending its bull run to an eighth consecutive day.

U.S. nonfarm payrolls rose by 2.509 million jobs last month – in contrast with consensus estimates of a fall of eight million jobs after a record plunge of 20.687 million in April.

Economists had forecast the rate jumping to 19.8 per cent.

The promising data raised hopes of a quick economic recovery as governments around the world ease social restrictions to stem the virus.

“Lockdowns are getting lifted around the world and I can see how that is cheering up the mood.

“But on the other hand, you can’t keep pushing up multiples forever,’’ said Masaru Ishibashi, joint General Manager of trading at Sumitomo Mitsui Bank.

“I think many market players are scratching their head as to how to interpret markets these days.’’

MSCI ACWI, an index covering 49 markets around the world, has risen to levels last seen in late February.

But it is trading at 17.6 times forecast earnings over the next 12 months, the highest in almost two decades.

The jobs data also bumped up U.S. bond yields, with the 10-year Treasuries yield rising to as high as 0.959 per cent on Friday, a level last seen in mid-March.

The sharp gains in U.S. bond yields over the past couple of days put more focus on the U.S. central bank, which will hold a two-day policy meeting ending on Wednesday.

Federal Reserve Chair, Jerome Powell, has said the U.S. economy could feel the weight of the economic shutdown for more than a year.

Exports contracted in May as global coronavirus lockdowns continued to devastate demand, while a sharper-than-expected fall in imports pointed to mounting pressure on manufacturers as global growth stalls.

Oil prices gave up big gains from earlier in the session as optimism over a deal by major crude producers to extend record output cuts gave way to disappointment that the accord didn’t extend beyond the end of July.

Both hit their highest since March 6.

“The market has been rallying on hopes of economic re-openings but the actual oil demand has not risen that much yet.

“In a way, the market is supported by a flood of liquidity,’’ said Tatsufumi Okoshi, Senior Commodity Economist at Nomura Securities, referring to monetary easing around the world since March.

In the currency market, major currencies were little moved.

Oil ticks up, but gains capped by demand destruction
businessTimes