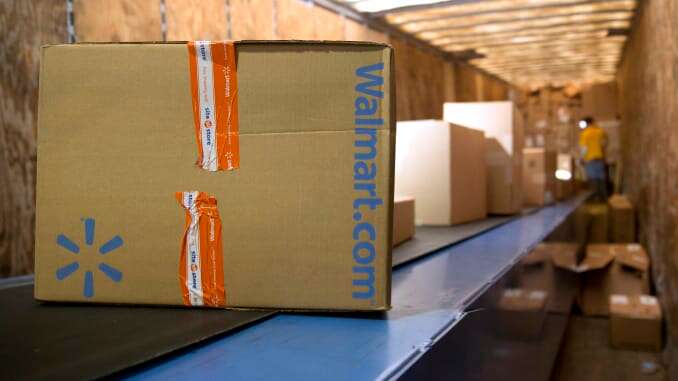 Walmart is launching a new service that allows third-party vendors to hire the retailer to store, pack and ship items for customers, a move that could better position the big-box retailer to compete against Amazon.

Through Walmart Fulfillment Services, third-party vendors that sell clothing or other items in Walmart.com’s marketplace can pay to have the retailer handle the logistics of getting items to a customer’s door. They currently have to use a third-party to handle fulfillment or do it themselves.

New and current vendors can sign up for the service starting Tuesday, according to Jare’ Buckley-Cox, vice president of Walmart Fulfillment Services. The company launched a pilot of the service a few months ago with a mix of brands across categories, including footwear, apparel and electronics.

Walmart said sellers and customers will benefit from the new service. It said sellers will pay a low fee to store and ship goods and be able to drive up profitability. Customers will have more brands to choose from, faster shipping and easier returns. The company did not say how much it will charge sellers, but said it would be “one of the lowest-priced services on the market.”

Walmart announced another e-commerce change Tuesday. In a company memo, Walmart executives said they are combining its buyers teams for the website and for the stores. Buyers will now be split into merchandising categories, such as food, and they will buy all items in that category regardless of where they’re sold.

With the service, he said Walmart will have more control over the customer experience. It can increase the number of packages with next-day or two-day delivery. It will have more visibility in warehouses, so it knows if it’s running low on an item. It can standardize the quality of packing and shipping, so items don’t arrive damaged or broken.

“It’s an important move as they compete and compete hard against Amazon and Target and others with a marketplace app,” he said.

He said it could also benefit Walmart’s bottom line. With Walmart Fulfillment Services, the company can get more out of its extensive network of warehouses and trucks.

Walmart could use its large footprint of stores to attract and increase sales for third-party vendors, too, he said. It could allow items sold by them to be picked up in stores — similar to how it handles online grocery orders.

“I could see that be an interesting next move,” he said.

Against a broader drop in the market, Walmart shares closed down nearly 2%. The stock, which has a market value of $324 billion, has gained nearly 16% over the past year.

Previous Article
British exports to the European Union (EU) could fall by as much as 14 per cent if the two sides are unable to strike a free trade deal, a UN study found. According to the UN Conference on Trade and Development (UNCTAD) study released on Tuesday, the fall also could be 9 per cent lower even if an agreement was reached, The imposition of tariffs under a no-deal scenario would crimp trade, with the effect amplified by so-called non-tariff measures (NTMs) such as quotas, licensing and regulatory measures protecting health, safety and the environment. NTMs would double the negative impact of tariffs and could lead to an overall 32 billion dollars hit to British exports, study said. The agriculture, food and beverages, and wood and paper sectors seem particularly exposed, it found, with a weaker impact on electrical and machinery, metal products, chemicals, and textiles and apparel. NTMs affect more than 80 per cent of trade in developed counties and more than 90 per cent in the EU, it noted. Britain left the EU in January and aims to negotiate a deal on future relations by the end of this year, when the Brexit transition period expires. Even if a “standard” free trade agreement emerged from the talks, British exports to the EU could still drop by 9 per cent, dealing a major economic blow as the single market absorbs 46 per cent of Britain’s sales abroad, it said. “EU membership has its advantages to deal with non-tariff measures that even the most comprehensive agreement cannot replicate,” UNCTAD’s director of international trade, Pamela Coke-Hamilton, said in a statement. In a no-deal scenario, Ireland’s exports to the United Kingdom are expected to drop 10 per cent as a result of non-tariff measures and tariffs, the study based on 25 years of data found. On the other hand, exports from developing countries into Britain and to a smaller extent into the EU could increase if Britain does not increase tariffs for third countries, it added. The study did not estimate the impact of a “soft” exit scenario that largely maintains the status quo, saying much depends on the details of the relationship that results. Britain has said it wants a Canada-style trade deal with the EU, but the EU has said this would require Britain to accept a level playing field in areas from state aid to taxation. Britain has said that it does not want regulatory alignment with the bloc and that this was not what the EU demanded of Canada for a free trade deal.
Next Article
US Health Officials say Coronavirus will likely cause a Global Pandemic