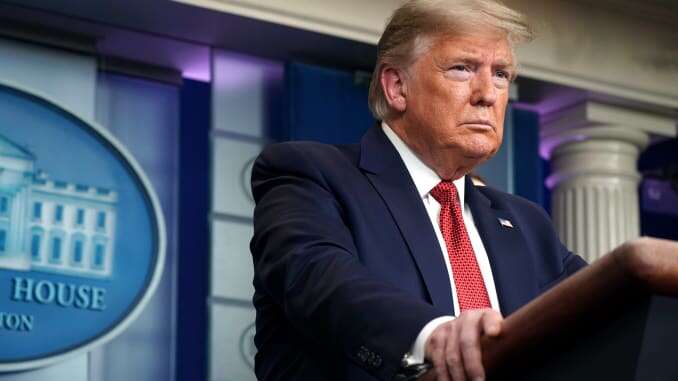 U.S. President Donald Trump faces a critical test to assert America’s leadership in the global fight against the coronavirus at the emergency Group of 20 meeting on Thursday.

As the White House scrambles to shore up support for its coronavirus strategy at home amid a spike in new cases, criticism has been mounting overseas about the administration’s approach.

“For a nation that has typically been viewed as a leading international body and generous collaborative partner — the U.S. is viewed as a day late and dollar short,” Frank Lavin, former U.S. Ambassador to Singapore and CEO of Export Now in Singapore told CNBC.

Days of partisan bickering in Washington D.C. to pass a $2 trillion stimulus package while the death toll soared above 1,000hasn’t helped global perceptions of the U.S. response to the crisis. As of Wednesday evening, the number of deaths in the U.S. had reached 1,041, according to data from Johns Hopkins University.

“In the U.S. it looks chaotic, disorganized, almost insane,” James Crabtree an associate professor at the Lee Kuan Yew School of Public Policy in Singapore told CNBC. “The fact that the president and (House Speaker Nancy) Pelosi can’t even speak to each other shows you how dysfunctional it has become. America will come out of this much diminished in the eyes of the world,” he added.

Thursday’s meeting could be an opportunity to put critics to rest. Saudi Arabia, which holds the rotating G-20 presidency this year, will host emergency meeting aimed at a coordinated global response to the pandemic.

Ahead of the meeting, Saudi King Salman Bin Abdulaziz Al Saud said on Twitter: “we convene this extraordinary G20 summit to unite efforts towards a global response.”

With members bracing for a global recession, the attention will turn to the leader of the world’s largest economy to right the ship.

“Coordinated fiscal measures in the manner of the 2008 financial crisis to stop the pandemic crisis from turning into a worse economic crisis than it needs to be should be a top priority,” Crabtree said.

As world leaders also mull joint action on medical supplies and funding for vaccines and treatments, the stakes are high for Trump to emerge with a united front or risk another country filling that vacuum.

There is a danger that “people will get out of the habit of looking to the U.S. and will look at other relationships,” according to Lavin.

Crabtree questions whether China would be willing to step in. “If China views it to be in its self- interest to play that kind of role, we have to ask whether we are moving into a world where the U.S. ceases to play the role of global leader.”

Uncertainty surrounding the G-20 power balance comes amid worries that a blame game between the U.S. and China over the origins of the coronavirus outbreak could disrupt consensus at the upcoming talks.

An opinion piece in the state-run China Dailynewspaper published earlier this week accused Trump of launching xenophobic attacks on China “to attempt to divert attention from his failure to prepare the US for the inevitable spread of the coronavirus.”

While the president’s repeated reference to the “Chinese virus” have flamed tempers in Beijing, both sides would be wise to bury the hatchet at the upcoming G-20 talks, according to Lavin.

China’s foreign ministry spokesman used “extraordinarily bad judgement” when he suggested the coronavirus may have been brought to China by the U.S. military, Lavin said.

If cooler heads don’t prevail, there is a fear that the coronavirus could undo the goodwill demonstrated between Trump and Chinese President Xi Jinping at the start of the year when the phase-one trade deal concluded.

“It is very hard to imagine that U.S.- China relations are going to be better at the end of this crisis,” Crabtree said.

Tags:
Previous Article
NSE returns to negative posture, indices down by 0.05%
Next Article
McDonald’s is pulling its all-day breakfast menu as it limits options amid Pandemic

Oil ticks up, but gains capped by demand destruction
businessTimes