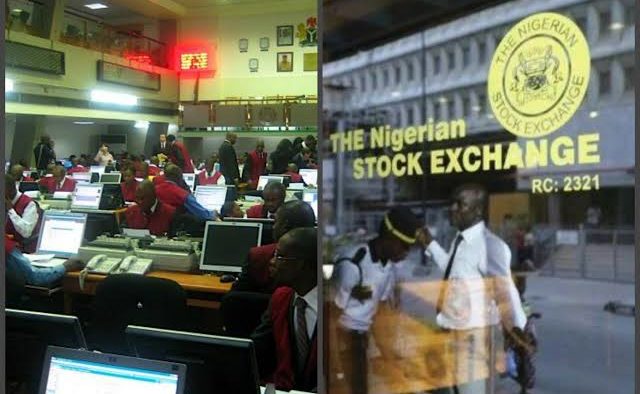 The Nigerian equities market sustained upward trend on Wednesday with a growth of 0.61 per cent, as investors continued to position in high capitalised stocks.

The upturn was impacted by gains recorded in medium and large capitalised stocks, amongst which are, Nigerian Breweries, UACN, Access Bank, Ecobank Transnational Corporation and FBN Holdings.

Analysts at Afrinvest expected market gains in subsequent trading days of the week due to the opportunity for bargain hunting.

NEM Insurance and Royal Exchange recorded the highest gain in percentage terms, appreciating by 10 per cent each, to close at N1.87 and 22k per share, respectively.

AXA Mansard Insurance followed with 9.80 per cent to close at N1.68 per share.

On the other hand, Ardova, formerly Forte Oil led the losers’ chart in percentage terms, dropping by 10 per cent to close at N15.30 per share.

Deap Capital Management and Trust followed with 8.33 per cent to close at 33k, while Consolidated Hallmark Insurance declined by 7.41 to close at 25k per share.

In spite of the growth in market indices, the total volume of shares traded declined by 20.7 per cent as investors bought and sold 307.72 million shares worth N2.81 billion in 4.419 deals.

This was in contrast with a turnover of 387.89 million shares worth N5.08 billion exchanged in 4,901 deals on Tuesday.

Transactions in the shares of FBN Holdings topped the activity chart with 50.25 million shares valued at N279.76 million.