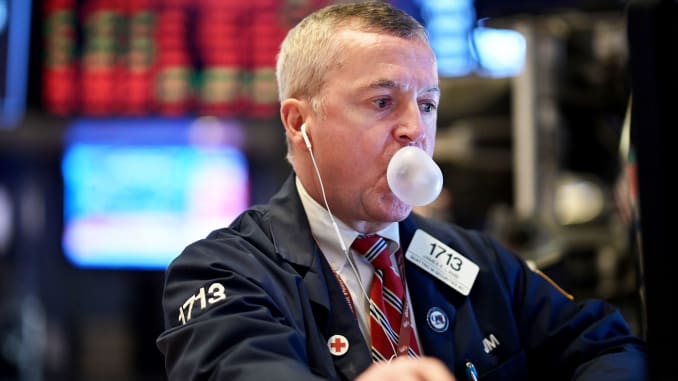 The move down in futures comes after the major averages regained a chunk of their losses on Tuesday. The Dow rallied more than 1,100 points while the S&P 500 had its best one-day performance since Dec. 26, 2018.

“Stocks posted impressive headline gains, but more strength needs to be seen beneath the surface to have confidence that the downside momentum in stocks has been broken,” Willie Delwiche, investment strategist at Baird, said in a note. “The weight of the evidence continues to argue for caution in the near term and we recommend that investors remain patient in the face of ongoing market volatility.”

Stocks were lifted Tuesday in part by hopes that the U.S. government will move forward with fiscal stimulus to curb an economic slowdown from the coronavirus spread. A White House official told CNBC that President Donald Trump pitched a 0% payroll tax rate for the rest of 2020. However, the timing of such policies being implemented remains uncertain.

“We need to see meaningful support for economic activity and credit backstops especially for small businesses, not a targeted approach executed only by the executive branch,” Joe Kalish, chief global macro strategist at Ned Davis Research, said in a note. “We will likely need congressional involvement.  This is a potential solvency problem.”

The number of coronavirus cases around the world total more than 100,000, according to data from Johns Hopkins University. In the U.S. alone, more than 800 cases have been confirmed along with at least 28 deaths, the data shows.

Tags:
Previous Article
NSE market capitalisation drops further by N656bn
Next Article
US companies in China are Finding it Harder to Make Money