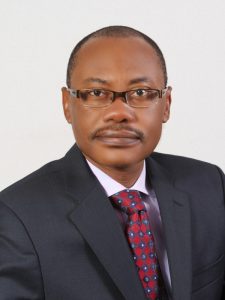 Dr. Adenike Fajemirokun, the Group Chief Risk Officer was elevated to the office of Group Executive Director, President’s Office, where she will take on new roles in addition to her schedule as the Risk Officer. She is the first ever female executive director in Dangote Group.

The Board of Dangote Cement Plc global apart from announcing the appointment of Cherie Blair, also announced and Mick Davies as another independent Non-Executive Director.

President Dangote Group, Aliko Dangote, speaking on the new appointments said “it is exciting seeing a female occupy such a high position. We are gender sensitive and create equal opportunities for both male and female to get to the top.”

“The new appointments are to strengthen the Group’s executive management team and to consolidate on its strategic business growth trajectory”, he added.

He joined Dangote Group in July 1997 and served as its Financial Controller and Head of Strategic Services till 2001 when he was appointed to the board of Dangote Industries Limited as Executive Director/ Group Strategist.

He started his working career at PricewaterhouseCoopers, a firm of Chartered Accountants in September 1984 and left in 1990 to join Liberty Merchant Bank Limited as the Financial Controller for three years.

Between August 1993 and July 1997, Mr. Alake served as the Managing Director/Chief Executive Officer of Liberty Merchant Securities Limited and was part of the team that provided consultancy services for the smooth take-over of the International Trust Bank Plc, by Dangote Group in August 1996.

He is a Fellow of the Institute of Chartered Accountants of Nigeria. Mr. Alake holds a Bachelor’s degree in Civil Engineering from Obafemi Awolowo University, Ile-Ife in 1983.

She started her career with Ove Arup and Partners as a Fire Engineer where she was responsible for carrying out qualitative and quantitative risk assessment of various assets and developing risk assessment frameworks for quantifying identified risks.

She later joined Deutsche Bank AG, UK, and served in senior leadership roles such as Director and Global Head Operational Risk, Head of Transaction Management Group for leverage finance at the Corporate and Investment Bank. Prior to specializing in the Risk Management field, she held positions in finance as a front office quantitative analyst at Goldman Sachs London and New York.

Dr. Fajemirokun worked with First Bank of Nigeria where she developed the operational risk management framework for the bank as well as its Business Continuity Certification by the British Standard Institute. She also managed and tracked the firm’s risks across all directorates, transaction services and alternative investments.

In 2010, She founded and headed AFRisk Management Consultants Limited which developed the enterprise risk management frameworks for some of the country’s major institutions including Central Bank of Nigeria, First Bank Nigeria and First Bank Capital Plc.

She was appointed Chief Risk Officer of Dangote Group in 2013 and leads the Risk Management Functions for the Group and its various Businesses where she oversees the company’s governance model and enterprise risk program. She develops and manages processes to identify, assess, monitor and reduce risks that could interfere with the achievement of the company’s goals and objectives.

She is also responsible for managing the Group’s Insurance, Procurement Portfolio and Logistics.

A holder of B.Eng. in Civil, Structural and Fire Engineering and a Ph.D. in Risk Informed Engineering both from the University of Manchester, UK, Dr. Fajemirokun is a Fellow of the Engineering and Physical Sciences Research Council (EPSRC) and Specialist member (SIRM) of the Global Institute of Risk Management. She is also a visiting professor at the University of Manchester, UK. She has been recognized globally for her work with the Operational Riskdata Exchange Association (ORX), Institute of Risk Management, UK. She is a member of the Lagos State Research and Innovation Council.

Ometoruwa is an accomplished international investment banker. Prior to joining the Dangote Group as the Group Executive Director, Corporate Finance and Treasury, Austine Ometoruwa provided advisory services to the Dangote Group over the past 25 years in his capacity as the Executive Chairman of his firm, Boston Trico Capital LLC.

He started his professional career as a credit analyst at Chase Manhattan Bank. He thereafter progressed to Bank of Boston as the General Manager in Nigeria before moving on to Standard Bank of South Africa (Stanbic) as Strategy Consultant.

Mr Ometoruwa setup and launched the Africa Finance Corporation (AFC) as the founding President and CEO.

He was awarded the Dean’s Prize and First Class Honours Bachelor’s Degree in Banking and Finance from the University of Lagos, Lagos, Nigeria.

She studied law at the London School of Economics (LSE) and graduated with a First Class Degree in 1975. While studying for her Bar examinations she also taught Law at the University of Westminster. Cherie came top of her year in her Bar examinations and was called to the Bar in 1976. She was appointed Queen’s Counsel (QC) in 1995.

In 2000, shortly before the implementation of the Human Rights Act, Cherie and 21 other prominent Barristers set up a ground breaking legal practice, Matrix Chambers. She has also argued cases in the House of Lords, one of the most well-known being the Begum case.

She is an accredited Advanced Mediator under the ADR Chambers/Harvard Law Project and an Elite Mediator with Clerksroom.

Cherie Blair is the Founder and Chair of Omnia Strategy where she focuses on strategic international legal and advisory work and practices as a barrister, representing over 30 governments as well as numerous multinational corporations in international disputes.

In 2012, she was designated to serve on the ICSID panel of arbitrators and is a panellist at the Kuala Lumpur Regional Centre for Arbitration. She continues to work independently, primarily as an arbitrator and mediator

Cherie is closely involved with various charities and is a strong advocate for women’s rights. She is the founder of the Cherie Blair Foundation for Women, which runs programmes to support women entrepreneurs across the developing world, including Africa. She is also Vice Chair of the International Council on Women’s Business Leadership founded by Hillary Clinton.

Cherie sits as an Honorary Chair of the World Justice Project. In 2007, she received the Eleanor Roosevelt Val-Kill medal in recognition of her high ideals and courageous actions.

In 2013, she was awarded the CBE in the New Year Honours for her services to women’s issues and to charity in the UK and overseas.

Cherie is also an active campaigner for prison reform and was ‘President of The Commission on English Prisons Today’ between 2007 and 2009, under the auspices of the Howard League for Penal Reform.

She is an adviser to “B Team,” a not-for-profit initiative formed by a global group of leaders, to be a driving force for social, environmental and economic benefit. She is wife of former British Prime Minister Tony Blair.

Sir Mick Davies is currently Chairman of Macsteel, a global trading shipping company, and Chief Executive of the Conservative party of the United Kingdom.

Davies has occupied several directorship positions. From 2001 to 2003, he was Chief Executive of Xstrata Plc, one of the world’s largest global diversified mining and metal companies; executive director and chief financial officer of Billiton Plc; Chairman of Billiton Coal and Executive Director of South African State-owned Eskom.

With extensive capital markets and corporate transaction experience, he has raised over US$40 billion from global capital markets and successfully completed over US$120 billion of corporate transactions. He participated in the creation of the lngwe Coal Corporation in South Africa; listing of Billiton on the London Stock Exchange; merger of BHP and Billiton into the largest diversified mining company in the world and the successful merger of Xstrata and Glencore amongst others.

Sir Davies is the immediate past President of the Council of Members and Chairman of the Board of Trustees of the Jewish Leadership Council in the United Kingdom, member of the Brookings International Advisory Council and a Trustee of the Institute of National Security Studies, Israel.

He is a Chartered Accountant by profession and an alumnus of Theodor Herzl School in Port Elizabeth. He holds an honours degree in Commerce from Rhodes University. South Africa, and an Honorary Doctorate from Bar llan University. In the 2015 Queen’s birthday Honour’s list, he was made a Knight’s Bachelor

We are placing Nigeria on global map of sugar producers – Dangote