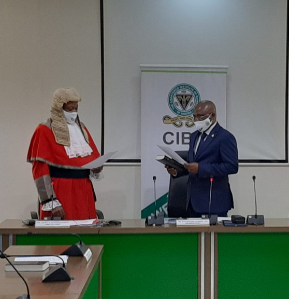 The Chartered Institute of bankers of Nigeria (CIBN) on Saturday inaugurated Mr Bayo Olugbemi as its 21st President/ Chairman of Council for the year 2020/2022.

Olugbemi, in his acceptance speech, paid tributes to the institute’s founding fathers who made sacrifices and contributions that had positioned it for its current growth and development.

The newly installed president said that he was aware of his  responsibilities, adding that he was prepared  to transform and move the institute to greater heights and international recognition.

Olugbemi,who was sworn in by Justice A. Olateru-Olagbegi, at the Bankers House, Victoria Island, Lagos, tagged his tenure’s strategic mission statement as ‘A-TEAM’.

“Our strategic focus is crafted into an acronym “A-TEAM”; this is the time to dream big dreams into reality.

“Our desire is to be a global reference point, an institute that everyone is proud to associate with, one that sets the agenda for the banking industry, for businesses and the economy as a whole.

“The journey will commence with these intiatives encapsulated in the acronym A-TEAM: Accelerated development, Technology and Digital Enhancement, Engagement for growth, Accountability and Transparent Leadership and Membership drive for values,” he said.

Olugbemi said that although the institute had recorded successes in the past, he would ensure that it exploited new opportunities and exciting territories before other organisations.

The newly inaugurated chairman, who also assured that the institute would not continue to bask in the euphoria of its past glory, called on stakeholders to support him with creative and innovative ideas.

The institute’s immediate past President, Dr Uche Olowu, had earlier thanked the CBN Governor, Dr Godwin Emefiele, NDIC CEO, Alhaji Umaru, Mr Herbert Wigwe, the Leader of the Body of Banks CEO’s and other stakeholders for the support given him during his tenure.

“As I handover the mantle of leadership of the institute today to my successor, I enjoin all stakeholders of our Institute to accord him all necessary support he needs to take the institute to greater heights.

“As he takes over the mantle of leadership today, I’m most convinced that the institute is in safe hands given his wealth of knowledge and experience as evidenced in his numerous career accomplishments,” he  said.

Highpoint of the event was the formal swearing in of the 21th President, supported by his wife and the ceremonial transfer of the Presidential chain.