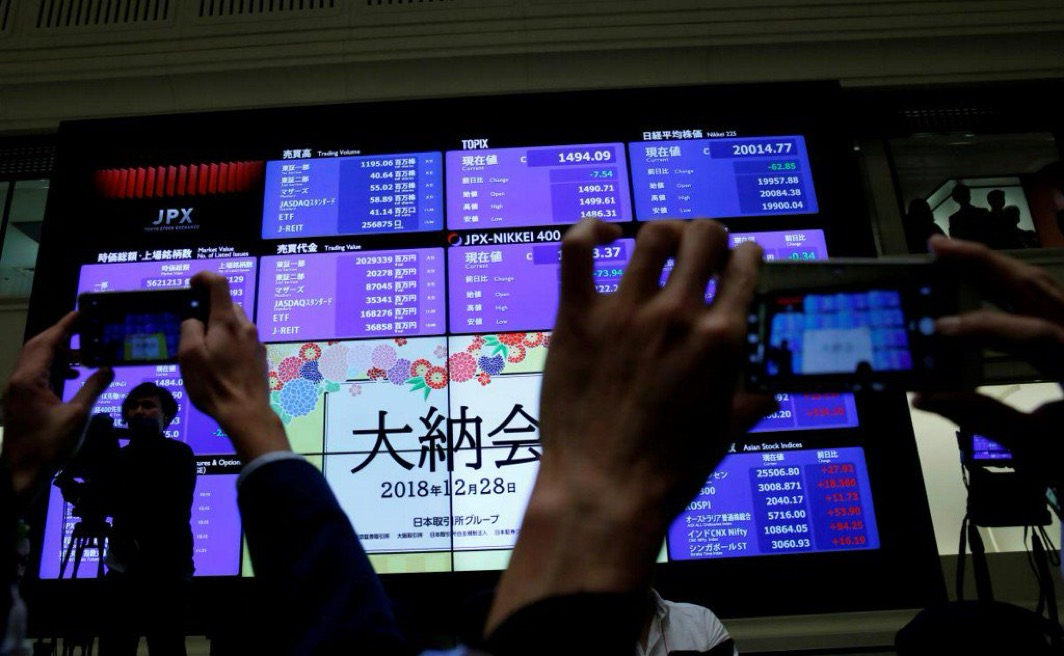 Asian markets marked time on Thursday with two major centers – Japan and China – shut for holidays while the dollar held on to overnight gains after the U.S. central bank poured cold water on rate cut expectations.

Australian shares slipped 0.7 per cent, while New Zealand was up 1.2 per cent and South Korea’s KOSPI index added 0.4 per cent.

E-Mini futures for the S&P 500 were unchanged.

Trading in Japan will resume next Tuesday, while China will be back in action on Monday.

Global equities markets have scaled new highs since the start of the year largely on expectations of easy monetary policies around the world while a positive tone on U.S.-China trade negotiations has also aided sentiment.

But analysts are now wondering whether this strong run can continue.

“Coming into May, the search for the next catalyst becomes an obvious necessary condition to give an answer to the traditional question: is it time to sell and go away?” said Claudio Irigoyen, economist at Bank of America-Merrill Lynch.

Irigoyen was referring to a well-known adage, “sell in May and go away”, which warns investors to dump their equities’ holdings in May ahead of the northern hemisphere summer trading lull and switch to fixed income in a bid to maximize returns.

“We remain constructive that the recovery in China will translate into a recovery in the emerging market-export complex and Europe; the worst-case scenario will be avoided regarding Brexit and that the recent progress will materialize in a U.S.-China deal in 2Q,” Irigoyen added.

“It follows that the overall environment is therefore still favorable for EM, not so much due to cheap valuations but still attractive enough risk-adjusted carry.”

Investors are keeping a close eye on first-quarter earnings for clues on the health of the U.S. corporate sector.

S&P 500 earnings are now expected to show growth of 0.5 per cent for the quarter, according to Refinitiv data – a starkly better outcome than the start of April when earnings were expected to decline by two per cent.

In currency markets, the greenback took a breather following strong gains overnight after the U.S. Federal Reserve kept the target range for its policy rate unchanged at its May meeting.

Markets had anticipated the Fed would signal a “precautionary cut” to stoke inflation, but “the statement gave almost nothing away in this respect,” Anna Stupnytska, global economist for Fidelity International said in an emailed statement.

The dollar index held at 97.62 against a basket of major currencies after going as high as 97.728 on Wednesday. It stood at 111.61 yen after consistently easing from a four-month high of 112.39 touched last week.

The Fed’s mixed messages on policy have been a drag on the dollar. It downgraded its inflation outlook and made a technical cut to rates on excess reserves.

Yet, Fed Chairman Jerome Powell said the factors dragging on inflation might be “transitory” and he saw no case for a rate move in either direction.

“When pressed on the potential for a rate cut, he simply emphasised that the Committee is satisfied with the current policy stance and did not give away much more for markets to cling onto,” Stupnytska added

Dollar hawks also received a boost from early data on the labor market as a report by payrolls processor, ADP, showed U.S. private employers added 275,000 jobs in April, well above the 180,000 estimate.

Still, reports on construction spending and U.S. manufacturing came in weaker than expected, sending conflicting signals about the strength of the economy.

In commodities, oil prices declined after data showed U.S. crude production output set a new record last week, but the losses were capped by the intensifying crisis in Venezuela and the stopping of Iranian oil sanction waivers by Washington.

Spot gold was marginally weaker at 1,271.55 dollar an ounce.